The football program at the University of Notre Dame is legendary. In its more than 130-year history, Notre Dame football has thrilled students, alumni and fans from across the Nation, creating an undeniable tradition. The Norte Dame Stadium has served as the home for the team for over 85 years. A true source of pride, the stadium recently completed a $400 million renovation. Siteline was selected to install the millwork in the newly renovated locker room and the new members-only private club, known as the South Club. Helping to create the incredible environment for the players and the fans, it was an honor for Siteline to be part of the amazing future of this collegiate treasure.

Within the final critical weeks of the South Club and Locker Renovation projects of being completed, the Notre Dame family learned of the passing of Coach Ara Parseghian. The University wished to memorialize the life of the famous coach who guided the Fighting Irish for 11 seasons, winning two national titles along the way had died at the age of 94. Nothing would have been more fitting than to celebrate his life in the renovated locker room and new South Club – which was not yet completed.

Team Siteline immediately recognized the importance having these environments ready for the family, friends and alumni who would gather together in a few short days. Completing our work and preparing the spaces to be showcased now became a moral mission to the Notre Dame community. Siteline doubled the work force, re-scheduled the working day hours and coordinated with the other trades on site to accomplish all of the millwork installation.

Siteline completed the millwork installation of both the team locker room and the South Club in time to have the spaces prepared four days early, ready to support the services celebrating the accomplishments of Coach Parseghian 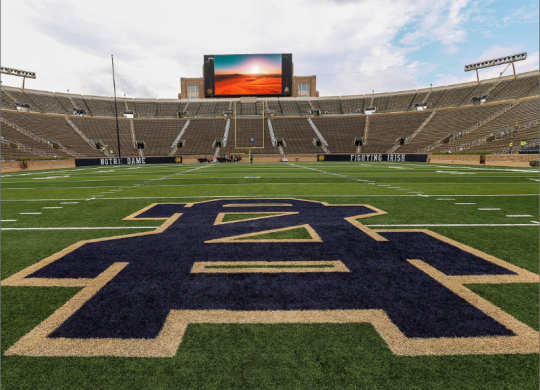